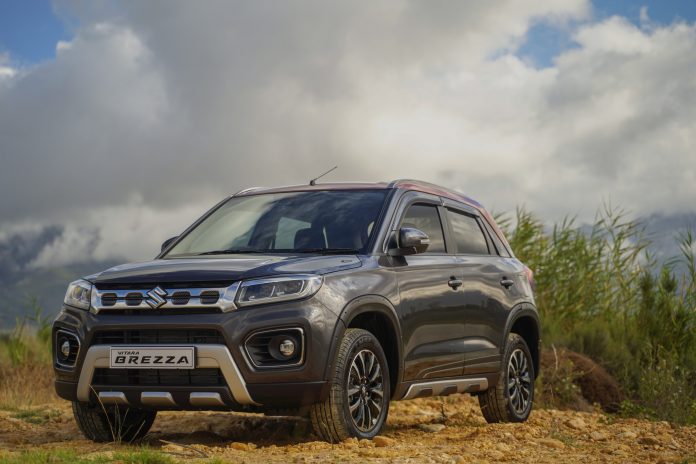 Suzuki is on a roll, there’s no doubt about it. They manage to produce cars that are reliable, good value, attractive (mostly!) and even fun to drive, and they have had some incredible sales hits lately. With the Jimny, for example, Suzuki can’t keep up with demand, so much so that they have had to start making it in an additional factory. Just last year, in the midst of the COVID pandemic, Suzuki South Africa achieved their best ever monthly sales – that’s some doing, considering the trouble other manufacturers were facing.

The latest addition to the local Suzuki fleet, the Brezza, is going to continue the upward local sales curve, of that we have no doubt.

The full name of this compact SUV is the Suzuki Vitara Brezza, the Vitara name used to show that this belongs to the Suzuki SUV range. Made in India, the Brezza slots into the Suzuki range below the full-sized Vitara, which will remain as the range-topper of the Suzuki stable. It’s a family vehicle that has focused on space, specs, safety and price, which has resulted in it being the fastest compact SUV to reach half a million sales in India, where it is the most popular car in its class with a 23% market share.

Suzuki knows that most people looking for a compact SUV aren’t looking for 4×4 prowess, but rather the styling of an SUV combined with a bit of extra ride height and competence on dirt roads, and the Brezza ticks all of these boxes. It’s two-wheel-drive only but has ground clearance of 198mm so that it can carry you away on far-flung adventures.

Behind the modern, rugged family visage is a familiar engine, one that can also be found in the Jimny, Ertiga and Ciaz. A 1.5-litre petrol unit rated for 77kW at 6 000 rpm and 138Nm of torque at 4 400 rpm, it can be had had either with a four-speed automatic or five-speed manual gearbox.

On paper, these powertrain specifications aren’t particularly impressive, and questions might be raised about more powerful engines (the Suzuki BoosterJet engines would be great in the Brezza!) and more modern gearboxes with more gears. On the road, however, the engine performs satisfactorily, with smooth power delivery, a fair bit of torque and enough power to get the fairly light Brezza moving along at a bit of a lick. Yes, it would be nice to have an extra gear on each of the ‘boxes, but they are perfectly adequate as well as proven to be reliable. Hard to argue with Suzuki’s choices, then. Fuel consumption is always an important consideration, and Suzuki claims an average mixed consumption of 6.2L/100km.

Safety is something that everyone should take seriously these days, so it’s nice to see that the Brezza managed to garner a four-star rating in the Global NCAP tests. It’s also satisfying that the entire range gets the same safety equipment: ABS brakes with emergency brake-force distribution and brake-assistance, airbags for the driver and front passenger, pre-tensioners and force limiters on all seatbelts and ISOFIX-mountings for child seats. The vehicle also features an award-winning body structure that disperses crash energy away from occupants.

Standard across the range is a 7-inch touchscreen display complete with Apple CarPlay and Android Auto, as are automatic climate control, electric windows all-round, a height-adjustable driver’s seat, rear parking sensors and remote central locking. There are two specification grades in the Brezza range: GL and the more opulent GLX.

The GLX gets nice-to-haves like alloy rims, cruise control, leather-clad steering wheel, keyless entry and push-button start (which is great!), LED lights, automatic windscreen wipers and a few exterior cosmetic garnishes. If you want a Brezza and your budget doesn’t stretch to the GLX, don’t be too worried as the GL is actually more than adequate.

Almost everyone wants to drive an SUV these days, but there aren’t a lot of really good ones at the lower end of the budget scale. This is why the Ford Ecosport does so well, along with other players in the segment like the Renault Duster, and is why the Brezza is a guaranteed success.