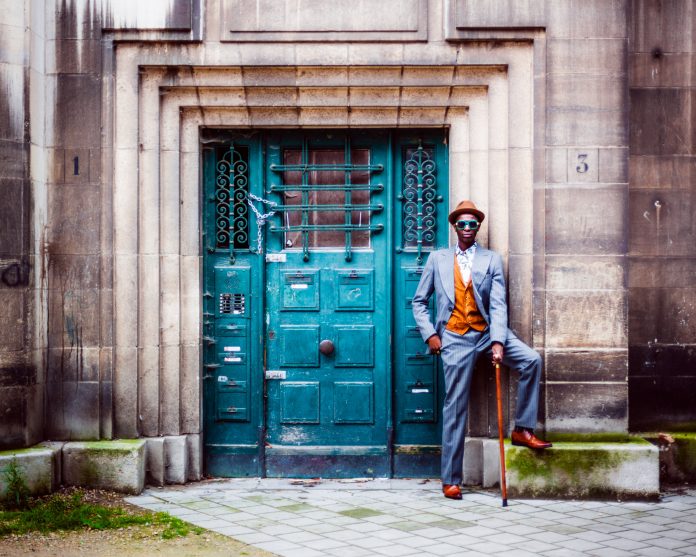 In the DRC, a group of trendsetting men step out in the finest designer threads and don a grand attitude as they walk the dilapidated streets of the slums of the country’s capital, Kinshasa.

They turn heads and as whispers turn to calls of praise, the men, who are known as Congolese Dandies or Les Sapeurs, bask in the attention that their flashy and well-tailored suits garner them.

Sapeurs is an abbreviation of the French term Société des Ambianceurs et des Personnes Élégantes (the Society of Tastemakers and Elegant People). CNN pinpoints this influential fashion subculture’s roots in the colonial era of the 1920s and 1930s. At that time, it was a form of mock protest as workers donned their French colonial masters’ clothing on Sundays and paraded through the streets to the amusement of onlookers.

The outfits bore a strong resemblance to dandyism which can be traced to France and Britain and saw middle-class men at the time dressed in an immaculate array of expensive designer garb and accessories in a bid to appear high class.

…it was a form of mock protest as workers donned their French colonial masters’ clothing on Sundays and paraded through the streets to the amusement of onlookers.

The movement picked up in the 1960s at the height of tensions between the newly independent Congolese government and the West. It’s understood then-president Mobutu Sese Seko told the public to take pride in African dress and shun western influence. However, André Matsoua, considered a pioneer of sapeurism and an anti-colonial activist, shocked many when he returned from Paris dressed head to toe in flamboyant garb, blatantly defying Mobutu’s call.

Another influential figure of sapeurism was Papa Wemba, a singer who began his illustrious career in 1969 and was known for his outlandish outfits and incredible stage presence. He was determined to craft an identity that would be an ode to his own reverence of dressing well and was inspired by his trips to France where he had the luxury of being exposed to gentlemanly fashion.

Speaking to BBC, Wemba, who died in 2016, said the movement was a lifestyle and adherents had to live by strict codes. “The Sapeur cult promoted high standards of personal cleanliness, hygiene, and smart dress, to a whole generation of youth across Zaire. When I say well-groomed, well-shaved, well-perfumed, it’s a characteristic that I am insisting on among the young…,” he proudly said.

While dressing up to the nines isn’t an everyday occurrence for people who live in Congo’s townships – 80% of the 77 million in the mineral-rich state live in hardship – the Dandies set themselves apart by providing visual relief for communities who admire their extravagant style as a form of art despite battling dire poverty.

Cost isn’t a factor, Les Sapeurs bent on celebrating themselves through their dress, wear outfits that can cost thousands of dollars – Armani, Hugo Boss and Tommy Hilfiger are just some of the sought-after brands. Theirs is a tale of artistic expression in the face of socio-economic circumstances, which include government corruption, lack of services, poverty and poor infrastructure in most of the country’s townships.

The influence of the Sapeurs has spread to South Africa with an active branch located in Cape Town. Blanchard Koelany, a man who credits himself with bringing the movement to SA, says their presence can bring a positive atmosphere and offer protection. “Generally all people like to see someone who’s well-dressed… You have this demonstration of peace and gaiety – it creates a good atmosphere. Then South Africans might protect me during eruptions of violence against foreigners because they like to see us dressed like this,” he told Narratively.

The New York Times describes Daniele Tamagni‘s book Gentlemen Of Bakongo: The Dandies Of Sub-Saharan Africa as a compelling collection of images which contrast against abject poverty and bring a sense of elegance and pride.

Goodwill is also characteristic of another group, Old School Classic Car Club (OSCC), which originated in the East Rand in 2016. Jeremiah Lekau, one of the founders, says their love of vintage clothing and cars brought them together and led to their involvement in charity work for communities in Johannesburg. While vintage cars are costly to maintain owing to expensive parts, Jeremiah says having them is a nod to an era where top hats, suspenders, checked shirts and Cressidas were the ultimate statement of cool!

Like the OSCC, the Swenkas embrace old school glam, adorned in their best to impress each other and revel in competitions where the best dressed is carefully selected. In his 2004 documentary, Danish filmmaker Jeppe Rønde chronicled how poor Zulu men who worked in hostels in Johannesburg during the gold rush era in the 1900s began this movement, giving prizes of livestock and cash to the best dressed.

Their influence has spanned decades with the Smarteez, a Soweto based group, and the Skothanes taking their cue from them in the 2000s and adding their own sophisticated twist by donning colourful shirts, bow ties and suitcases.

While the Smarteez isn’t as prominent anymore, groups such as rapper Riky Rick’s Cotton Eaters movement have become the latest fashion subculture to exert influence. The artist coined the term after his fans and the media started taking notice of his eclectic style, which was a fusion of extravagant Italian designer pieces such as Gucci, Nike footwear, tailored formal pants and hip-hop regalia. Today, Riky Rick has hosted his first annual Cotton festival which is a combined celebration of music and fashion.

Mahlatse James, fashion influencer and former Puma ambassador, says trends play a large role in the formation of groups such as the Dandies, Swenkas and Cotton Eaters. He places aspiration at the centre of trends spreading.

“It’s always been a little more than money and mostly about the feeling of acquiring the said trend. The Congolese Sapeurs is a perfect example of this. The same applies to how the South African Swenkas would never miss a beat so far as their style is concerned despite that their living conditions are mostly not even in the grade of their clothes. We see it today with the defiant need to get with the trend whilst paying no attention to value. Fashion has a way of building a fanatical world for those keen for it.”