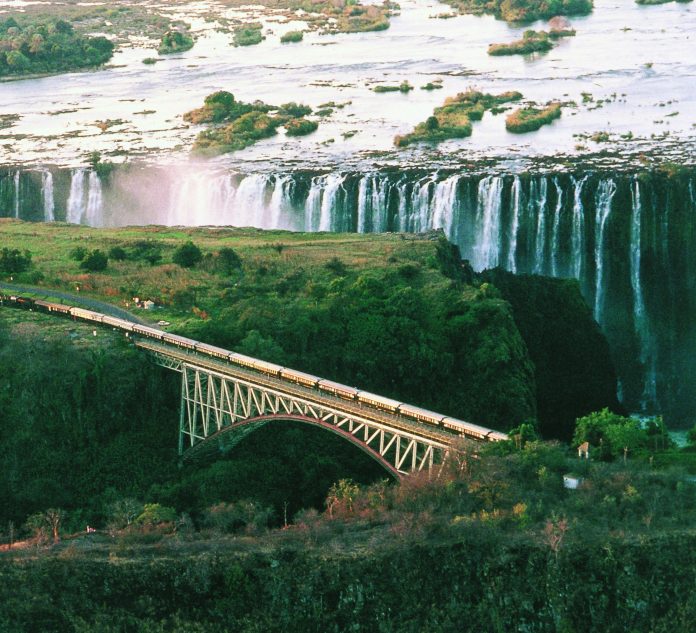 Onboard this unique train there is an impeccable eye for detail, 5-star service, award-winning wines, and an array of traditional dishes made from fresh, local ingredients. In a series of journeys lasting from 48 hours to 15 days, Rovos Rail links some of the subcontinent’s greatest and most magnificent destinations from Pretoria to Durban, Cape Town, Victoria Falls, Namibia, Tanzania, and Angola in the most relaxed and elegant fashion. The magic and mystery of Africa can be experienced in the epitome of luxury.

South Africa is a magnificent country with an exceptionally rich tapestry of landscape, game, history, and culture. Take a 2-night/3-day Journey from Pretoria to Durban or Cape Town and enjoy some of South Africa’s most famous stops along the way.

This safari between Pretoria and Durban departs during the summer months and includes game drives, a battlefield tale with a world-class historian and a look at unusual African ceramics. Experience the Nambiti Conservancy with its incredible biodiversity including big five, savannah, grasslands, thornveld and tall acacia trees, mountains, bush, birds and battlefields. Ardmore Ceramics is a story about the Zulu people whose sense of rhythm, colour, dance and song, as well as the spirit of the African imagination, is exerting its influence on the other continents of the world, before travelling the Valley of a Thousand Hills to Durban.

This 11-day African Collage panoramic sojourn winds its way from Pretoria to Cape Town and includes a golfing and non-golfing itinerary. Game drives in Kruger Park and Hluhluwe whilst winding its way along the coast to Durban. Traverse the Valley of a Thousand Hills to S from where you can explore the region. Continue to Port Elizabeth for a game drive at Addo Elephant Park then on to Oudtshoorn for an ostrich-farm visit followed by an impressive descent through the Outeniqua Mountains to George. After visiting the natural paradise of Knysna, the train traverses the spectacular Garden Route to the winelands and Cape mountains before this magnificent expedition ends in Cape Town.

A kaleidoscope of golf, game, and scenic beauty to entertain the most discerning players with optional excursions for leisure guests at all venues. Golfing enthusiasts can enjoy a trip from Pretoria to Sun City in the hills of the Pilanesberg, down to Durban, and up through Hluhluwe, Mkhaya and Kruger.

Passengers might like to travel 1,400 km up to Victoria Falls and travel along one of the world’s longest stretches (114km) of straight railway line before traversing Hwange National Park, a rich and diverse wildlife sanctuary in Zimbabwe.

The untamed beauty of Namibia

Take a remarkable journey of discovery from the savannahs of the Highveld to the Atlantic in the west. Stop in Kimberley before continuing to the Fish River Canyon – second in size to the Grand Canyon – and Garas Park with its quiver-tree forest. Guests continue across the untamed beauty of the Kalahari Desert to Namibia’s capital for a tour through Windhoek. Sossusvlei, a stunning pan in the Namib Desert, will be your stop overnight followed by a night in the game-rich Etosha National Park.

This epic expedition is one of the most famous train journeys in the world. From Cape Town, traverse the Karoo and visit Kimberley’s Diamond Mine Museum, and the extraordinary Big Hole. Tour the capital city of Pretoria and enjoy the Big Five at Madikwe. Explore one of the natural wonders of the world, the Victoria Falls, before crossing the Zambezi into Zambia for a bush walk at Chishimba Falls. Descend into the Rift Valley and witness spectacular scenery as the train negotiates the tunnels, switchbacks, and viaducts of the escarpment. Pass the Selous – the largest reserve on the continent (spanning an area larger than Switzerland) – shortly before the bustling arrival in Dar es Salaam.

Rovos Rail offers a unique kind of African safari letting explorers take their time through the wide and beautiful expanse that is the Southern region of Africa.

In July 2022, Rovos Rail will set off on this new trans-African expedition travelling the famous east-to-west copper trail through Zimbabwe, Zambia, the Democratic Republic of Congo, and Angola uniting the Atlantic and Indian Oceans. This journey will be 15 days long and will cover 3,100km.

This 15-day, 4,300km voyage sets off from the Tanzanian capital, Dar es Salaam, and includes a game visit in the Selous Reserve, a fly-in 2-night safari in the South Luangwa National Park (Zambia), and a city tour of Lubumbashi (DRC). Thereafter it joins the Benguela line for short walking tours detailing Angola’s recent history and ends in Lobito, Angola.