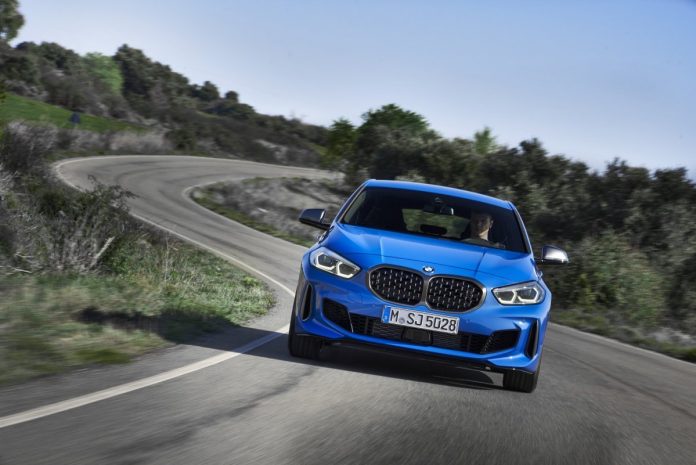 If you like going fast, you’re doing well professionally, and you don’t need anything bigger, the 135i M delivers a compelling argument. The real selling point can be experienced only from behind the steering wheel, on an open road, with your foot on the right pedal.

In the BMW world, the 1 Series is the starter kit – the gateway drug that gets you hooked on Bavarian products. The 135i M, though, is anything but a starter car – it is a muscle car in a hatchback body.

In Misano blue, the 135i M is an arresting sight, especially from the front where a kidney-shaped grille is bigger than anything kidney-shaped really should be. It’s so big that it spills onto the bonnet. But that’s the way grilles are going in the BMW universe – bigger and more “kidnier”. It works, though, in conjunction with a grinning lower grille, rakish headlights and a scalloped bonnet, while the overall look is that of a purposeful wedge of a hatch. Big 100mm-diameter tailpipes at the back are a hint of what the 135i M can do…

Bigger and roomier inside

It’s hard to look or feel past the cosseting bucket seats, but once you do, you realise that the 1 Series has got bigger and roomier, and there is a lot of technology packed in there. The 10-inch screens are inset into the dash and look spectacular. Basically, the 1 Series has adopted the 3 Series interior, and that is a very good thing indeed!

In terms of drivability, the 135i M is a hard car to put your finger on. It’s a BMW, which means something when it comes to dynamic driving, but the 1 Series is the only BMW that isn’t rear-wheel-drive in its base form. Most 1 Series cars are front-wheel-drive, which does affect the way they feel, but the 135i M xDrive is all-wheel-drive, which makes it different again. It feels utterly settled and composed at almost any speed, on straight roads or twisty ones, and it allows you to get the most out of the significant power.

Speaking of which, the sensational 2-litre turbocharged engine produces 225kW of power and 450Nm of torque, sending it from 0-100km/h in just 4.8 seconds! It is a hoot.

This car is all about performance, an area that BMW excels in, especially when the car in question has an M designation. It’s fast, exhilarating to drive, comfortable and practical. It’s another complete package, in a very different way to the Corolla.

Take a pew in one of the bucket seats – the base price of the BMW 135i M is R763,300. You can push this ever-higher if you’ve got more money burning a hole in your wallet because the options list is lengthy. The scary thing – this car is definitely worth the money! All new BMWs sold in South Africa include a 5-year/100,000km motorplan maintenance plan. Visit www.BMW.co.za for more information.