A world-first in bold bronze 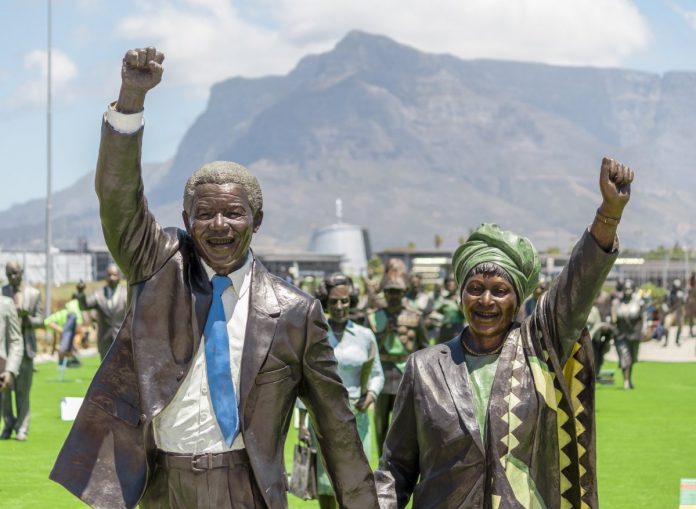 It started with a dream to honour struggle heroes in sculpture form. Artist and activist Dali Tambo, son of Adelaide and Oliver Tambo, was visiting his father’s grave when he reflected on the fact that there was no statue of his parents in South Africa, despite the massive role they played in the struggle for democracy.

Tambo Junior vowed to rectify this omission while trying to fill other gaps at the same time. Via the National Heritage Project Non-Profit Company, established to focus on heritage, arts and culture projects, he set about commissioning an ambitious collection of 100 – and eventually aiming at 400 – life-size bronze statues from 35 established artists working in South Africa. The result? By far the most intriguing art installation you’re likely to ever see.

If you visit Century City in Cape Town and take just R75 out of your wallet to cover the entrance fee, you’ll experience an exhibition of 100 giant bronze statues of heroes of South African history, arranged chronologically in an appropriately named Long March to Freedom, as if marching through time towards the advent of democracy. ‘Like’ Long March To Freedom on Facebook for post-lockdown entrance fee specials and protocols.

It’s the world’s largest outdoor representational display of specific individuals, and “truly a world first”, according to the Long March to Freedom website. It honours individuals who resisted oppression in South Africa from the 1600s (beginning with Harry die Strandloper, the leader of the Goringhaikonas and first prisoner on Robben Island, who died in 1663) to Freedom Day on 27 April 1994.

Other statues are of rebel kings and chiefs, such as King Mzilikazi Khumalo, King Moshoeshoe I, Dinuzulu kaCetshwayo, Bambatha kaMancinza, King Dingane, and many others. It then highlights the well-known heroes of the liberation struggle.

Discard what you think you know about statues, museums and educational activities and hear this, from the National Heritage Project itself: “In the past, statues were largely large male figures elevated above the common individual, usually on a horse, commemorating a largely colonial history. We are aiming to redress South Africa’s history, in an anti-monument kind of way, by putting the statues on the ground, by making them accessible and by letting them tell a different story.” They say this process of “decolonizing bronze statues” means a tour through the procession is an immersive and moving experience. It’s also informal – you can take a selfie with your favourite figure and people have had their wedding photos taken at some of the exhibition’s previous locations, says Zelda Stroud, who sculpted O.R. Tambo, Charlotte Maxeke, King Moshoeshoe and others, and who feels passionately about the new ways people can interact with art through an exhibition of this nature.

It started with a dream to honour struggle heroes in sculpture form.

Stories that have never been told before are captured in this procession, and in some instances, personal belongings of the subjects were made available to the sculptors to incorporate into the artwork. And the artists themselves were exposed to opportunities they never had before, says Zelda. “I never had the chance to do a lifesize model before Charlotte Maxeke. It’s because people like Dali Tambo took a risk on people like me that South African artists had the opportunity to do large-scale work.”

“About 35 South African artists have produced these bronzes, and some of them have conducted mentorships in conjunction with the artists and foundries,” says the National Heritage Project. This means that many up-and-coming artists have been trained as sculptors during this process. The impact of this project is, of course, not limited to sculptors and four or five foundries, but includes “hundreds of foundry workers who physically produce them, backed by a Long March to Freedom team that coordinates everything”.

The exhibition has been hosted in Pretoria and at Maropeng but has been in its new home in Cape Town since November 2019.

…as if marching through time towards the advent of democracy.

Hear the names Albertina Sisulu, Charlotte Maxeke, Yusuf Dadoo, Joe Slovo, Annie Silinga, Helen Joseph, Walter Sisulu, Ida Fiyo Mntwana, Chris Hani, Victoria Mxenge, Steve Biko, Beyers Naude… Now you can put faces to the names and hear how these people helped shape the country we live in today. It’s a wonderful, intriguing and fun way to educate ourselves – and our children, or nephews and nieces – about important and overlooked parts of our country’s history.

While you’re out and about…

“Making a lifesize sculpture is a long and complex process about which most people have no idea,” says artist Zelda Stroud. “It involves a range of skills and practitioners. Ten to 15 artists and artisans are employed for every sculpture that is cast. The artists makes a small version of the proposed sculpture known as a maquette. You need people to make the mould, a robotics company enlarges the maquette digitally, you add clay and reapply detail, a foundry makes the mould, then you must cast wax, make a ceramic mould, cast the bronze, chip it out, weld the pieces together, and do the colouring at the end. It’s skilled and labour-intensive work and it’s a feather in the cap of the organisers that they insisted all this work happened locally, too, so that local jobs were created and skills developed. The artist is only the beginning of the process and quality control.”

If your interest has been sparked by the Long March to Freedom exhibition, you can also stop by the Bronze Age foundry, in the Donald Grieg Gallery and Bronze Foundry. It’s adjacent to the Silo District at the V&A Waterfront, inside the Transnet Harbour entrance on Duncan Road. There you can view the casting process from glass passages.

Head to the airport – the statue of OR Tambo there was made by Paballo Majelo, Kaogelo Mashilo and Zelda Stroud. All three artists also worked on pieces for Long March to Freedom.